Here is the new tier list for League of Legends patch 11.19. But before that, we want you to know if you want to buy LoL Account, MmoGah is a good place to go. Now, let’s get into the tier list!

His Q's damage was slightly reduced and it actually impacted him significantly, lowering his win rates in both the top and mid lane by about 1%. While he was a contender for the S-Tier before, he now comfortably belongs in the A-Tier or possibly even very high B-Tier. He's still safe but not as impressive of the pick as before.

His W's cooldown was reduced significantly, which has made him much more forgiving and impressive to play against when he's ahead. His win rate is up about half a percent and since he was on the border of the S-Tier, he's been moved up in this update.

He also received a small cooldown buff and his win rate is steadily rising this patch. It wasn't a big enough buff to change his placement, but he's still in the S-Tier anyway.

She received some minor buffs to help her out this patch, so her win rate has increased slightly. She's another champion that we'll keep an eye out for but her placement is untouched.

She receives a huge cooldown buff to her passive, making her a stronger laner and slightly more effective team fighter. Her win rate has skyrocketed this patch, especially in the high Elo. Having access to her passive makes her a much more oppressive lane bully. She also gains access to range poke more frequently and doubles as a shield. In Korea, for example, her win rate is up 53% in high Elo. We moved her up to the S-Tier to convey the shift in power.

Renekton receives a small compensation above this patch. His win rate went up by 2% and there's a chance that we need to move him back to C-Tier again.

In spite of receiving a buff to his W, Sion continues to underperform this patch. While he is better than before, so are plenty of other top laners. His win rate hasn't really been changed significantly. We're moving Sion down to the B-Tier. 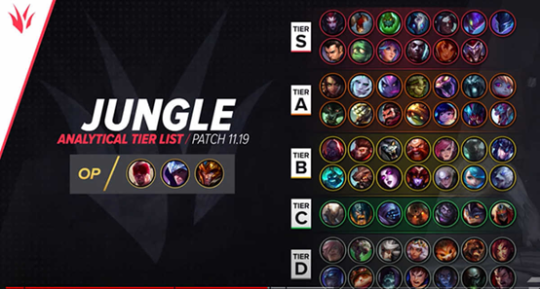 The first buff that we'll be covering is Gragas's small AP ratio buff. A little extra damage hasn't changed too much, but his overall win rate has gone up about a quarter of a percent because of it. His placement remains untouched.

Her win rate is still rather low - 44% right now. We will leave her in the D-Tier.

Her Q received a minor buff. Her high Elo win rate is identical to last patch but her overall win rate has increased slightly because of it. We're okay with her current B-Tier placement.

He's gaining a ton of traction. His powerful flex potential currently merits a 32% ban rate in high Elo. He's especially strong to draft because he can lull the enemy jungler into a false sense of security.

He is now top tier. After careful optimization following his buffs, players have figured out that Talon is incredibly powerful. This fast clear speed paired with what he'd expect in the assassin makes him a trending pick in Korea. To expand on this, his high damage map mobility and the speed at which he outputs that damage make him pretty impressive.

Riot hit him with another nerf hammer to make sure that he doesn't dominate the world stage. The nerfs have resulted in his win rate dropping about 1%.

She received a small amount of extra health regeneration to work with and her solo queue win rate in high Elo has increased about half a percent because of it. She'll remain in the B-Tier after this change.

Fizz got his powers back and more. Following the revert as well as the buff to his E, he's once again one-shotting everybody on Summoner's Rift. The reduced E cooldown has put him in a great spot. We will leave him at S-Tier with the 51% win rate at the moment.

Following minor mana buffs this patch, his win rate has increased by about 1% in high Elo. The little things count with volatile champions like him and he's staying in the S-Tier.

She's definitely in the S-Tier. On her release patch, Vex has already a 50% win rate, which is technically pretty good. However, as players get better with her, that number should theoretically go up. So it might be a little bit too high at the moment and we expect to see some nerfs in the near future.

We have Miss Fortune and Vayne in the OP-Tier, followed up by Ashe, Ezreal, Draven, Jinx, Samira and Ziggs in the S-Tier.

He was far too strong in the previous iterations of the game, but in the near future, I'm sure Varus will receive some balance changes to make him a more suitable pick for most players. He remains in the S-Tier.

Following a big buff last patch, she saw a huge increase in her win rate. Her growth has continued into this patch as well and at the moment, she's incredibly popular in Korea. She's actually the second most picked Marksman in high Elo and globally, she takes a spot at No.5. 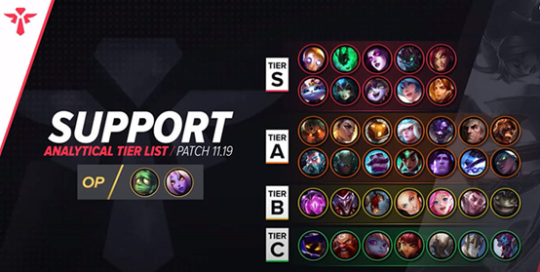 Our OP picks this patch are Amumu and Soraka, followed up by Blitzcrank, Thresh, Morgana, Maokai, Zyra, Yuumi, Nami, Lulu, Sona and Leona.

Soraka was also nerfed because her last buff was far too much. With the healing on her ultimate slightly reduced, I wish I could say her reign of terror has finally come to an end. The fact that she now removes healing reduction with her ultimate provides so much agency. She's a valuable teammate to have in any team fight now and alleviates pressure from her teammates.

As a result of these various enchanter nerves, Leona is back in the S-Tier as she's not getting bullied out as hard anymore.

It's still insane to me but we live in a world where movement support is actually OP right now. In high Elo, his win rate sits below 53% and he's actually more popular in what's supposed to be an off roll right now.

The above is the tier list for LoL Patch 11.19, which mostly comes from ProGuides Challenger’s video. They currently run a website where you can talk to a lot of professional coaches to improve yourself. Also, if you need an LoL Account to help achieving your ranked goals before the patch ends, welcome to visit MmoGah.