How to Fish in Animal Crossing: New Horizons

Fishing in ACNH is one of the greatest pastimes. It’s also a very rewarding activity because you will make a good amount of Bells Animal Crossing by fishing. But some people are getting frustrated when losing so many fish. In this guide, GosuNoob, ConCon, and Minipa show you how to fish in Animal Crossing: New Horizons.

Getting a Fishing Rod

The first thing you need to do is craft a Fishing Rod. Once you've set up your tent and have a chat with Tom Nook, he'll give you a free DIY tutorial and teach you how to craft a Flimsy Fishing Rod using his DIY workbench. You'll need 5 Tree Branches to craft it, and you can find Tree Branches on the ground or by shaking trees.

You have to spot a dark shape floating in a pond, river, or sea to catch a fish. Stand on the shore, looking towards the fish, press “A” to throw the line. It has to drop in front of the fish. If it drops too far from the fish, it won’t attract its attention.

The fish will poke the bait, and when the fishing rod's floater submerge and a "plop" sound is heard, that is when you must rapidly press “A” button to catch the fish. You have to do this a few times to get used to it. The fish will poke the bait by one to four times before biting, so you need to be careful and only press “A” when you hear the bite. If a fish pokes at your reel four times without biting, it will always bite on the fifth time. In GosuNoob and ConCon’s videos, you will see when is the exact time to press “A” button.

You can also craft a Fish Bait once you dig a Manila Claim. If you can’t find any fish, use the bait, and one fish will appear right away.

The most significant time-saver and hardest trick of all is Shadow Analysis. You can estimate what the fish is with Minipa’s methods:

During idle position (when a fish is stationary and moves its tail in a set pattern), the fish's shadows behave differently for each size. Smaller shadows swerve their tails at a much higher frequency than the larger ones. Size 1-3 shadows are just enlarged versions of each other, and there's no distinct differences other than the size. The only thing is that the frequency of its tail swerves lower as the size increases. Once you hit size 4, you will notice that his tail has a greater angle, and compared to size 3, this makes the swerve more like a whip instead of a bounce-like movement. 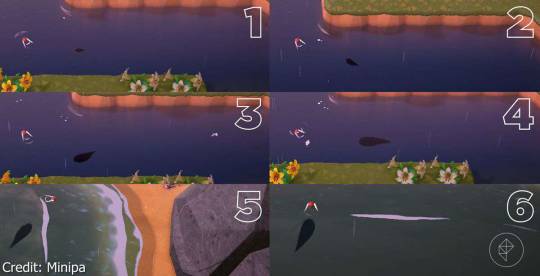 Despite the tail differences, size 1-5 have the same shape, it being top-heavy that drastically becomes thinner towards the tail. However, size 6 is different from every other size. Not only is it bigger and of a different shape, but also swerves at a lower frequency. The size 5 fish has the same whippy tail swerves as the size 4 and the same top-heavy head as the previous sizes, while the size 6’head is rounder than a size 5. A size 6 has a thicker and longer body. Its girth is more evenly distributed, and its shape doesn't become thinner drastically towards the tail. 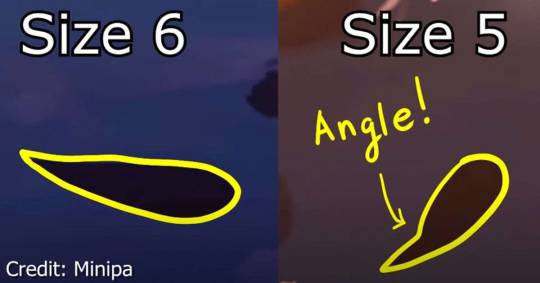 Behavioral Differences: for a size 6, its tail moves at a slower frequency than a size 5. But when you look at the peak of a swerve, you will also notice that, for the size 5, you will see a blocky texture and a more whiplike tail. But for size 6, the tail swerves much smoother, more methodical, and you don't see that blocky texture at the peak of its swerve. This is very useful for hunting a Coelacanth because a Coelacanth only spawns in the rain. In the river, a size 6 shadow is pretty easy to tell from a size 5, but when it's raining and in the ocean, the waves and the raining particle effects can obscure the shape of the size 5 and size 6, making this more difficult to discern. But, if you look at a tail swerve, it's still pretty obvious compared to the size 6, even with this visual handicap.

Many of you may have trouble judging the angle to cast the rod properly. I blame the controller for not having the sensitivity to make micro-adjustments. If you can’t make those turns, I suggest walking backwards and holding the control stick in the fish's direction. Slowly walk towards it then cast your rod. It takes a little more time for cast, but I found that a casting significantly improves doing this than trying to make tiny adjustments. Also, to prevent the fish from moving the moment you cast your rod, you should only cast your rod right after the fish has moved. Remember, despite the technique, it will still take practice.

Some people will call it Scaring away Fish. Sometimes, running can reach the fish you're trying to scare, but here's two methods that will accomplish what running and pole vaulting can’t.

The first method is called Rod Pulling. You’ll want to cast your rod and get the attention of the fish you want to scare away. The moment you grab the fish's attention, instantly retract your rod, and the fish will disappear. You don't have to worry about the fishing rod losing durability because you will only lose durability if you successfully caught something.

The second method has the best range and an area of effect. Sometimes, you will get unwanted fish in your runs. Instead of releasing them right away, you can keep them and use them to scare away fish that are not in reach. This is useful for mystery islands because many fish you don't want could spawn in close proximity. So, dumping a single fish could scare them away, saving time compared to trying to scare them by foot or rod.

Keep in mind that other actions like digging up anything, using a ladder or a Pole Vault can scare away fish as well. This won’t help you scare away fish efficiently, but it can prevent yourself from accidentally scaring away rare fish.

First, you have to know that fish shadows can’t spawn in water that is on your screen. Knowing this, you can use the Force Spawning technique on mystery islands No. 1 and No. 10, according to Ninji's Datamine.

To scare away every fish in the area from the clifftop to the river, you’ll want to open your camera app and position yourself so every part of the rivers and clifftop is in your view, while the river mouth is not. Run around and scare away any fish left on the screen. You won't be able to pole vault or use any tools, so sometimes, if the fish is a little bit further, or it spawns outside of the screen, you have to wait for them to get closer before you can scare them away. Once this is done, stand for about 45 seconds before turning off the camera. Most of the time, at least one Sturgeon will spawn.

Keep in mind that this is impossible to accomplish in September for the Northern Hemisphere and March for the Southern Hemisphere, because Salmon and King Salmon, which only spawn one month of the year, spawn in a river mouth. They will compete for the river mouth's spawning pools with the Sturgeon!

That is how to fish in Animal Crossing: New Horizons. If you find these videos helpful, hit the subscribe buttons and share them with friends. Don't forget to bookmark the news page on MmoGah so you don't miss out on any ACNH news and guides. For players who don’t have time to farm materials or Nook Miles Ticket, it is a good idea to buy Animal Crossing items online, and this is the fastest way to build up your island with no effort…Read the post on MmoGah: How to catch fish in ACNH