Instead of making ArcheAge Gold above the water---fishing, today we are going to explore the underwater world—sunken ships. Salvaging sunken ships can be a fun way to make ArcheAge Unchained Gold. To get gold in this way, you have to learn how to find sunken ships and explore the bottom of the ocean, then raise the ships and transport boxes.

The video below is from Furrypicks, in which he shared some useful guides and tips with us.

Items that You Need

The items you're going to need to get started are a submarine, a sonar for the submarine, a merchant shooter, 10 recovery pouches which you can either craft with 50 labor, 5 leather and 1 recovery pouch kit from a general vendor or you can buy them off the auction house. But they can be a little expensive. You'll also need an underwater breathing device and plenty of labor. This is going to be pretty labor-intensive. Some of the items that we highly recommend are the air cannon for the submarine, which will save you some labor. The sea breeze shroud light or better to evade anyone that might want to steal your cargo and at least one friend to watch radar and help you transport packs from your sunken ship.

How to Find Sunken Ships

You're going to find sunken ships in the Arcadian sea. They will spawn at 4 am and pm (PST) and at 10 am and pm (PST). Other time zones will be listed below.

On the Arcadian sea, you'll find these broken lifeboats. 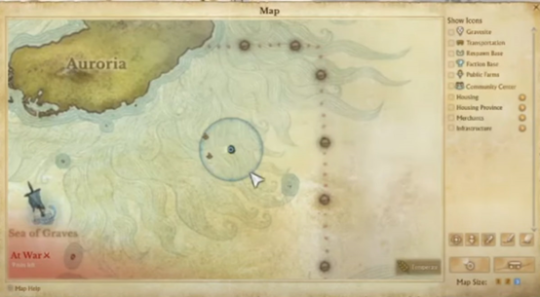 The best way to find them is by using your radar. Once you've found one, you need to use your ship to wreck the boat just by crashing straight into it. The reason for this is that you don't want anyone else using radar to know that you're there or any other sunken ship hunters to come and try to get the same sunken ship.

Then it's time to explore the bottom of the ocean for your sunken ship. You'll need to use an underwater breathing device either from your clipper, the air tank for your sub or the one you can get from a quest line. Once you're at the bottom of the ocean and not in danger of drowning, you can begin to search for a patch of bubbles, which is generally close to the spot where you first saw the broken lifeboat. Keep in mind when wrecking it that you may move it away, so it may not be right where it was when you first saw it .Marking it on the map before hitting is a good way to keep track of the location. When you've found your field of bubbles, it's time to use that expensive submarine. You'll need to equip the sonar and use it within 40 meters of the bubbles, which will cause an animation and then the sunken ship will be revealed.

Now to raise a sunken ship, you'll need to swim to the center of the ship and attach 10 recovery pouches, which will cost 25 labor to attach each one. Once they are all attached, you'll need to spend 200 labor to cut the rope, which will raise the ship to the surface. As soon as the rope is cut, anyone in the Arcadian sea is going to get a notification that a ship has been raised. However your coordinates are not given, so anyone searching will still have to actually find you. At this time, you need to summon your merchant shooter and pull up close to the raised ship, since both your ship and the race ship will be on radar, so be cautious.

Now you can start uncovering boxes and transporting them to your ship. Each one will cost you 200 labor to uncover and the shiny boxes will require a hundred thousand proficiency and exploration. I recommend that you uncover one box and then transport those crates to your ship. It may take a bit longer, but if someone comes to steal your loot, at least you save some labor on the boxes you hadn't opened yet.

Once all of your crates have been stored on your ship, it's time to take your stuff to turn it in. You need to turn in at Relic Traders which are located at the Diamond Shores Dock or Two Crowns. Two crowns is your safest option since it's in a new alliance zone. However it's also very far from where you'll find the ships, so you'll have to travel quite away to get there and use a lot of time. Diamond Shores will take a bit to unload and if the Doc isn't upgraded, it isn't the safest option but still not the worst. Freedich is not a bad option as long as you are cautious and use a friend to scout out the island first.

Gold and Labor You Will Spend

To raise a ship, it's going to cost you 400 labor, with an extra 600 labor if you don't have an air cannon. Unwrapping the cargo will cost 1600 to 1800 labor, if you have the proficiency to open the shiny cargo. So a total of 2,000 labor. As you gain proficiencies, these numbers are going to decrease and you'll get much better profits per labor. Each ship is going to contain 16 to 18 packs. We've listed the value of each pack below. 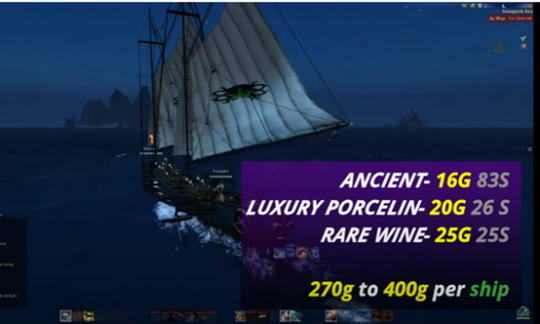 But you can expect to make 270 to 400 gold per ship, depending on which packs drop. If you can't open shiny crates, you may make a little.

It's always better to bring a friend. Because it’ll easier to spot broken lifeboats and defend your loot plus it's more fun.

Don't use tons of labor raising a ship just to get to the surface and then find people waiting for you.

Unwrap one box at a time

I hope you never get robbed but it happens. So protect at least what you’ve spent the labor.

Mark whatever lifeboats you can

You can mark more than one broken lifeboat if you plan on raising more than one ship. Then use your map markers to mark the box and wreck the lifeboats. You can ideally only hold one sunken at a time but you can get all the searching out of the way at the beginning of your hunt.

Try to lighten ship up

Each sunken contains up to 18 packs and the lighter your ship is, the faster it is. So remove all non-essential parts from your ship and make it faster.

Don't bring too many people

Having friends around is awesome but splitting loot between too many people is going to hurt you.

If you have someone with you, don't spend all your labor giving them a payout. It'll make your trips a lot less lucrative.

Lastly, if you get robbed, don't get frustrated. Don't just quit or move on to lower risk things. Sunken ships are a great way to make gold and you would have a lot of fun.

For more ArcheAge guides, please visit us, MmoGah, a website where you can buy cheap ArcheAge Unchained Gold with fast delivery.