Welcome to the New World house guide! Today, we are going to talk about three of the best spots to put your houses in strategically and where to put your Inn cooldown in the late game. The content comes from Sethphir’s video, and thank you, for the amazing guide.

You basically have an option for the first house - you can have one in major town that you own for fast travel, or Brightwood.

If in major town, it doesn’t offer much, though it does give you some storage space with the storage chest. But it won’t cost you a lot, so you may want another house in another location – Brightwood.

While leveling, you probably want to have a home in Brightwood. Mine is very cheap, and it also gets you pretty much anywhere you want to go on the map, besides the starting towns. For most of the time, your faction will own one of these starting towns at least, so you will be able to teleport to whichever one your faction chooses, cheap and fast.

This is the house of mine in Brightwood. 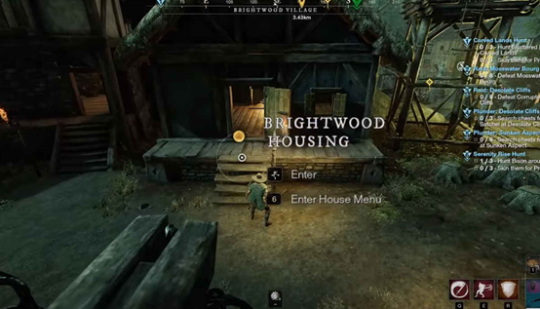 It should be a 5k house, cheaper if this is your first time buying a house. It's right next to the town board and the war board, so it's a great placement. It is also the closest to Great Cleave and Edengrove, which will be places where you're going to be fast traveling for quests. 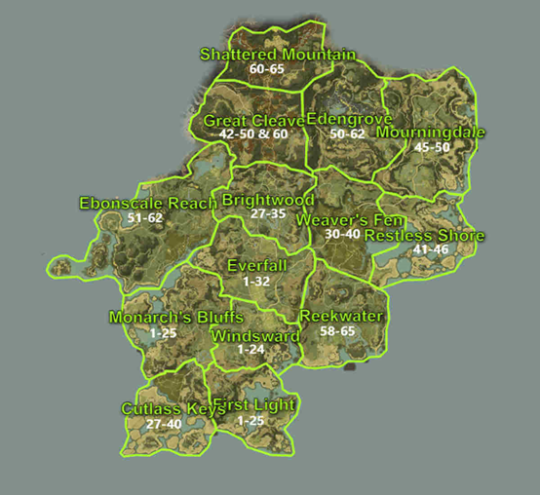 So I would recommend this 5k house until you figure out where you permanently want your houses at and while you save up money for those super big houses because they are expensive, like 20k or more.

The reason why you want to have a house here is because of these 65 portals that spawn in the area. It's kind of hard to get to, so complete them fast.

There's also another location called Imperial Palace, which is a very good farm spot, especially for cooking ingredients. If you want any tier 5 recipes, this is the place to go. There are massive provision crates, stockpiles, and also a bunch of high-level Elites, which is going to be part of your normal in-game farming route.

I bought this little green shack for 5000 New World Coins.

It's really cheap but nice. It doesn't have a lot of items that you can hold in it, but it's good for now until you figure out where you want to put your in-game house because it is going to be super expensive and you may want to migrate that on the area, but all you're after is this fast travel and then the five trophy slots because you need to fill up your house with the trophy slots so that you can get max proficiency boost.

Reekwater is one of the best in-game zones in the game. It actually includes three of the endgame content zones. My house in this area is directly right of the town board, so it's super quick if you want to sign up for any war or something.

One of the reasons why Reekwater is a good choice is that it has a food cart, where you will get rare cooking ingredients, like spices, seasoned blends and cooking oil, fish oil, all that stuff that's super hard to find. The second reason is what we have mentioned above, three in-game zones. The first one is Eternal Pool, which is the Protector’s Arena. The second one is going to be the Lazarus Instrumentality, which is the hardest dungeon in the game, and then the Siren Queen’s Lair.

There are also level 65 portals, so you will need to teleport there to get those quickly once the portals come online, and they're going to take a while to spawn. If you don't get there, then you can't get your Tuning Orb components and materials, so being able to get here quickly and for free is definitely going to help you out.

Do keep in mind that all these fast travels to the homes have no weight limit to their cost, so you can stock up on full stuff and then transfer back to your main town, for example, and load the material.

I strongly recommend you put your Inn in Mountainhome Outpost because it is the hardest part place in the game to get to - it's going to cost you a lot to fast travel up here, and there's no discount.

This is going to be your best teleport for in-game farming, and the reason is that the Scorched Mines is here, which has tons of Calcium, and it's also going to have level 64, 65 opponents in here that are going to give you the highest watermark gear drops. It's also close to Myrkgard, which is pretty much the highest level zone in the game, along with the Siren’s area, which also has 65 portals in it. And it also has a ton of level 65, even some 66 high-level monsters that will increase your watermark a lot, plus the basic portals that are just around the map, so you're going to need to get there and start farming those once everybody catches up to level 60 on your server and starts kicking into gear.

The house inside the zone is completely up to you. If you have a bunch of cash and you want your house to look cool, go for it, but for me, I bought the cheap homes on the strategic level just so that I can get the teleports that I need now until I really get into that housing stuff in the late game.

So this is going to be your best in-game setup, and keep in mind that it starts with your early game, like level 25, 30, in Brightwood, and then you can come to Reekwater and Ebonscale homes in the late game.

Hope this helps give you some insight as to where to buy your home at. See you in the next guide.