A 40 year-old woman has been dubbed Mama Uganda after giving birth to 44 children. 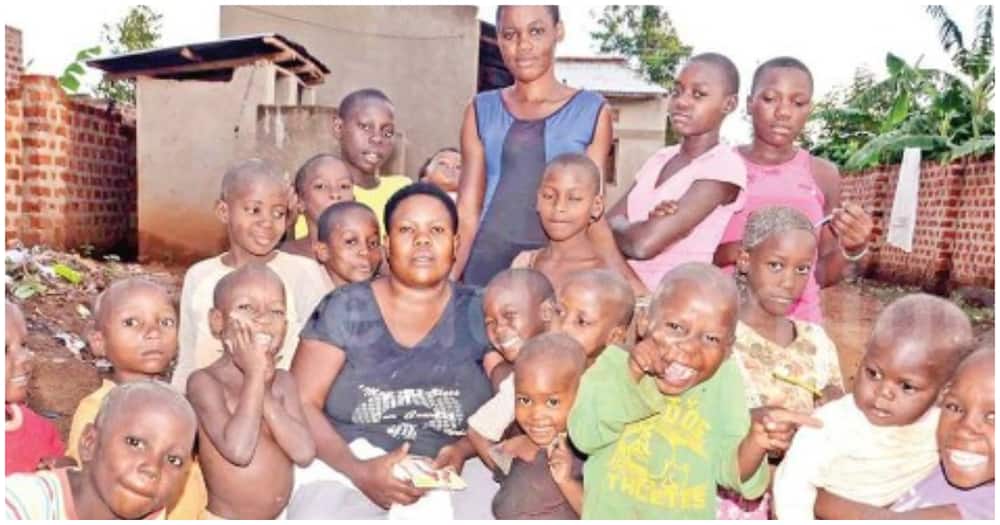 Mariam Nabatanzi aka Mama Uganda is from Uganda and became popular for giving birth to many children even though she's not married to any man at the moment.
Mama Uganda as she is popularly known in her community, told Joe Hattab, an explorer that she was married off at a very tender age.
According to her, her parents gave her up to her then-husband at the age of 12 and she started giving birth at age 13.
In her narration when she was visited by the documentarian, Mama Uganda said she eventually became a single mum after her husband abandoned them while disappearing with all the money they had.
Mama Uganda has been living alone, paying the dues of her remaining 38 children as six of them are dead. The single mum has been able to enrol all her children in school.
According to her, she delivered her babies without any form of health challenges.
Mama Uganda is said to have delivered a single child once, while all others have been twins, triplets and quadruplets.
The documentary confirmed that Mama Uganda’s children who are still alive consist of 22 boys and 16 girls. According to her, a doctor had told her that she is a very lucky and fertile woman.
The documentarian confirmed Mama Uganda had twins 4 times, triplets 5 times and quadruplets 5 times in addition to the single delivery she had. She’s said to have tried different family planning to stop her childbirth but that none worked for her.
Mama Uganda’s fertility has been commended by many who refer to her as a lucky and blessed woman.
Mama Uganda’s last child is just 4-year-old.
CLICK HERE TO WATCH THE VIDEO