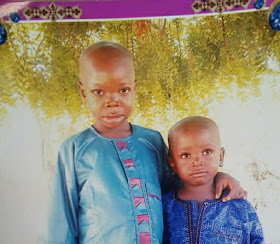 A Traditional Ruler in Mijulu ward, Mubi North Local Government Area, Adamawa state, Ishaya Hodi has been apprehended for allegedly exterminating 2 children after they ate local candi( otherwise known as Masar Kwaila in Hausa) which he served to them.

Already, the 70 year old royal father who is currently in police custody in Yola, the Adamawa state capital is being investigated with a view to unraveling the circumstances surrounding the alleged incident.

Hodi who is said to be Tugui by tribe and traditional ruler in his community in Miza, Mijulu ward, Mubi north LGA, was alleged to have masterminded the killing of the 2 little children of his subject, Idi Eske on Thursday last week.

According to sources, after eating the local candi, the victims, Marafa, 6, and Buhari, 4, of the same parents began to complain of stomach upset and later died at Miza clinic.

Narrating his harrowing experience to Newsmen, the father of the deceased, Idi Eske, said that he had been having a running battle with the suspect over farm land which he inherited from his late father.

Idi said that there was a time that Hodi threatened to kill his children so that he (Idi) will remain with one child like him, saying that the accused threatened that they should go to the bush and fight.

He further narrated that he went to farm 2 days after Hodi's threat, and that upon his return, he met the deceased critically ill and rushed them to Miza clinic for medical attention.

He stated that when they asked Marafa whether they have eaten something, the boy told them that they had eaten candi which was given to them by the suspect.

He informed Newsmen that some minutes later both Marafa and Buhari died, saying that they carried their lifeless bodies back home and kept because it was in the night, and that the following day, they saw them fuming and suspected that it might be a poison.

According to him, they alerted the police who later arrested the suspect, and that after autopsy was performed, he was informed that his innocent children died of poison.

But when contacted for confirmation, the Spokesman of the state police command, DSP Suleiman Yahaya Nguroje confirmed the incident, adding that full scale investigation is being carried out after which the suspect will be charged to court.