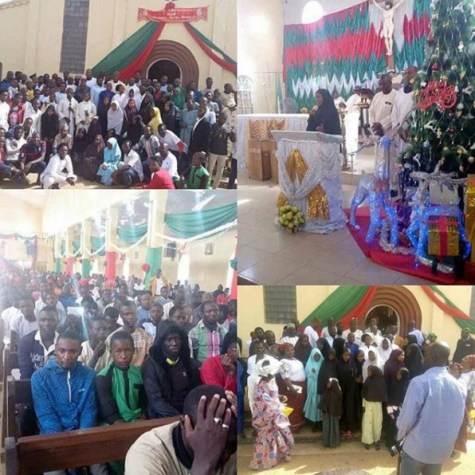 Members of the Islamic Movement in Nigeria (IMN) also known as Shiites group on Monday, December 25, visited some churches in Kaduna to celebrate Christmas with Christians. The Islamic movement used the occasion to advocate for religious tolerance and peaceful coexistence among all Nigerians, Leadership.

At the church, the group addressed the church members saying Islam is a religion of peace and living in peace with one’s neighbours is one of the directives of the Prophet Mohammed (PBUH). Dr Shuaibu Musa, the leader of the team that visited the church, said: “We are here to merry with our Christian brothers on the birth of he whose return has been foretold by our Prophet to herald the appearance of the awaited one Imam Mahdi.

“I will protect their religion and their Churches wherever they are found. We therefore hold these covenant that is why our leader Sheikh Ibraheem Zakzaky showed us that Christians are not our enemy but our brothers and neighbours.

“Together we can champion unity among all religious people and take unified stance against aggressive leaders. The Church should join the struggle against oppressors and tyrants right away.” In his remarks, ECWA pastor, Rev. Sule Mashan, said all human beings are created by God and in his wisdom make some Christians and others Muslims.

He therefore called for understanding among the two religions’ followers. After leaving ECWA, the Shiites group further proceeded to Christ Evangelical and life Intercessory Ministry, Sabon Tasha, Kaduna in Chikun local government area where they continued the Christmas celebration They were later joined by other Muslims from Katsina, Kano, Zamfara and Sokoto states.

Pastor Yohanna Buru, the general overseer of the ministry, thanked the Muslim group for turning up at the church to celebrate Christmas with them. He noted that the numbers of Muslims attending Christmas services with the church is increasing year by year as a result of better understanding and religious tolerance.

“We must remember that we are from one family, because Adams and Eve were our father, we all have our holy scriptures “Bible and Qur’an “and we also believed in paradise and hell fire ,therefore, we must be our brothers keepers, to live in peace and harmony,” he said.