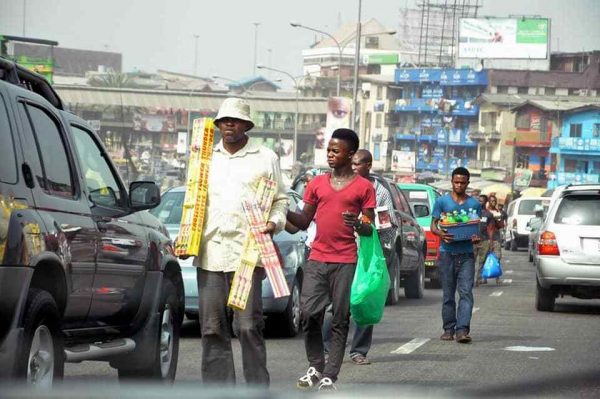 Nigerian Youths hawking in the Street to survive

Good day my wonderful readers, today I beg to digress a little as the state of things in my country Nigeria is getting out of hand hence this letter to my fellow Nigerian youths.

First, I want the young Nigerian to understand that only a Presidential thug can successfully invade the national assembly and snatch the mace away.

Therefore, let no one deceive you when they claim ignorance of the invasion.

Has anyone of you ever tried visiting the national assembly?

Do you know the kind of security checks you'll pass?

Most times without confirmation from whom you're coming to see, you are not allowed into the complex.

But some retarded thugs (mainly youths ofcourse) on jeep where expressly allowed into the assembly complex and inside the chambers and the mace snatched away?

The faces of these guys were not hidden, so why haven't the working Nigeria Police arrested these guys?

Just this morning, Channels Television confirmed that the mace was found by a PATRIOTIC NIGERIAN and returned to the Nigerian police.

Hmm, who is fooling who?

All these because of election reordering.

See, let me tell you the truth, 2019 will shock many of us the young and only future hope of this entity called Nigeria. Except a drastic measure is taken against this failed government, we will be back to status quo after the general election in 2019.

This government is ready to do anything to retain power including but not limited to rigging, killing, propaganda, false accusations and intimidation of oppositions of all sorts.

This is the obvious truth.

What baffles me mostly is how the international community especially the UK's Theresa May, and others buy the rubbish sold to them by this government.

We keep saying the world is watching, but the world is not genuinely ready to help Nigeria. They have their own problem and careless how our leaders lead us so long there interest is protected.

This is the obvious realty.

Nigeria is gradually turning to rot.

Bill Gates said Nigeria is one of the worst place to be given birth to, the good man is very very correct.

He came to Nigeria to advice the economic team for a better economy for our dear country, what he got in return is being called unprintable names including "school drop out", just because he didn't tell them what they want to hear. But this is the same man that will pay off some of our debt and spend so much towards eradicating Polio in Nigeria.

Presidents Accusations Against the Nigerian Youths

Coming to the accusation by the president that Nigerian Youths are lazy and does not want to go to school.

Today, the universities in Nigeria can barely take in the applicants seeking admission.

Today, tuition fees are in there all time high.

Today, Nigeria minimum wage is one of the lowest if not the lowest in the world, yet, the insensitive president and his executives have refused to implement a new minimum wage, but they want every Nigerian youth to go to school.

Is tertiary education free in Nigeria?

Where are the parents going to steal money from to take all their wards to school?

Meanwhile, wait, maybe I am misunderstanding the President; which Nigerian Youths was he actually referring to, because I know folks in the South do not joke with education, not withstanding the fact that the educational structure in Nigeria is wacked, the process of gaining admission, staying through school and graduating is very tedious.

The learning process and curriculum is out dated, yet universities mostly in the south take a very small percentage of total application yearly. While some not lucky go to nearby countries just to get educated.

This same Nigerian Youths do the nation proud in top universities of the world.

So which Nigerian Youths is he really talking about?

Coming to the accusation that Nigerian Youths depend on oil.

Please I have one question for you the Nigerian youth, how has the oil in Nigeria benefited you?

What was in the President's mind when he made such claim?

If we keep quiet, Nigeria will gradually die off like a burning candle.

Be you from the North, East, West please can you count what this government have done that you will forever be grateful of and remember in your life time.

The President claim to be fighting corruption but corruption have graduated so much today that virtually all institutions and agencies in Nigeria today are corrupt.

Here is my definition of who the present government call corrupt.

That is why any former PDP governor or senator that was alleged to have stolen and have financial crime commission investigating him will have there case files closed, witnesses disappear or cases dropped once they join the APC folds.

This is a big shame and have rubbish the image of EFCC. The word fighting corruption is now a mere slogan used against opposition.

Until the Nigerian Youths are ready to come together in one voice and say enough is enough, remedy will never be in sight.

What can they do without you?

I listened to the publisher of Sahara Reporters, Omoyele Sowore telling the Minister of Communication (Alhaji Shittu) how he played a major role in bringing this government in power and how before then, the minister was nothing in Nigeria politics and he therefore refuse to be called a nobody in politics.

If Sowore and few other young Nigerians can sell an Illiterate man to Nigerians and play a major role in making him president, WHY CAN'T WE DO SAME IN REMOVING HIM and electing a better candidate?

The minister could deny all he could but what Sowore said was true and even the wife of the President confirmed that majority of those in his husband's government played virtually no role during the electioneering process that brought his husband to power.

My message to every Nigerian youth is this, let us remove religion, ethnicity and sentiment aside and for once do the right thing by voting out this government.

Only a lazy Nigerian youth will vote Buhari to power a second time just because he is expecting #5000 stipends from the government.

Any young Nigerian that will vote for this government in 2019 will only be confirming the President was right that he or she is lazy.

If you know you are not lazy, you should have registered and collected your PVC by now.

Thank Goodness, we have a lot of young enlightened and hardworking Nigerians who have shown interest in running for the presidential election in 2019. Let us keep party aside and vote the right candidate for the interest of the better Nigeria we all long to see.

Please reflect on these words and make the right decision.