Reactions have trailed the death of a lion in a Kaduna zoo. 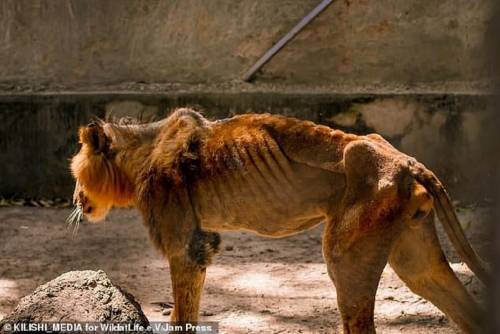 Nigerians have blamed the poor leadership of the country which manifested again in the poor management of the Kaduna State zoo where the lion reportedly died of health complications arising from hunger.

A cross-section of Nigerians lamented that the same scourge of hunger deals with millions of Nigerians daily, let alone animals.

According to Metropolexpress in a tweet on Thursday, the lion, which seemed to be one of the few surviving wild animals in the Kaduna zoo, died from health complications.

“Next level; Lion died of hunger in Kaduna zoo. A staff (member) of the zoo confirmed that the lion seen in viral video has passed on. According to the source, lion died as a result of health complications,” Metropolexpress tweeted.

Replying, Nigerians lambasted the government, saying if they could not take care of the animals, they should return the animals to the wild.

For instance, @iam_smithsalii tweeted, "Hunger that has been killing Nigerians on a daily basis, how much more of a lion?"

Ayòmídé Atáyéro (@AtayeroAyomide) said, "Shey a nbo Nigeria ni (Are we worshipping Nigeria)? The country is responsible for the well-being of the animals in the zoo. They can't take care of it, then they should return them back to wildlife."

@paaygyn wrote, "RIP Lion, you fought a good fight. In your next life, please don't choose to come during (Muhammadu) Buhari era, nah so so hunger go dey wire you (In another life, don't come during Buhari's administration; hunger will deal with you)."

Seun Nuės (@daemperor007) wrote, "There has to be a separate hell for corrupt Nigerian government workers and politicians where they can meet and have their reunion."

InstaDad (@JohnsonAbbaly) tweeted, "If this animal were left alone in the wild, it would have fended for itself. Zoos are not natural habitats and they deny the animals access to a robust ecosystem provided by nature. At least feed it or release it to the savannahs."

Poor animal, I am terribly sorry for him, this is a real mockery! Oh, I would write a lot of bad things to the government, but I can't. Why torture a poor animal? This is not human behavior, shame and shame for everyone who is involved in this!