Here are the “The 100 Most Handsome Faces of 2021” as published by TC Candler and the Independent Critics. 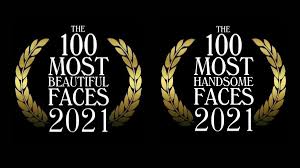 “The 100 Most Beautiful Faces List is not a popularity contest and it is definitely not country specific. It is not about the hottest or the most famous celebrity. Rather, the list attempts to inform & broaden public opinion, instead of reflecting it,” according to TC Candler’s YouTube channel.