AY Makun’s wife, Mabel Makun opens up on the intensity of depression she faced over criminal activities that she called the attention of the DSS to but was ignored. This is coming after the interior designer called out the Department of State Services (DSS) for ignoring her petition that has been on their desk for the last six months.

“So DSS Nigeria has a petition from my family in their office and for the past 6 months have refused to attend to it.

If there is anything I hate the most is having to put out private issues but from this part of the world, authorities have a way of not urgently attending to life-threatening issues. 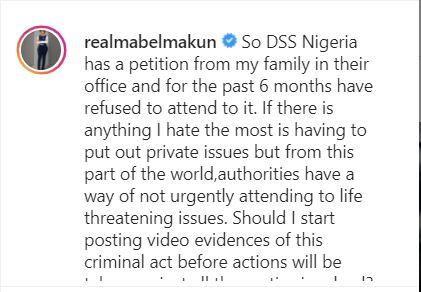