'How woman I took as mother convinced me to pack out of my matrimonial home, became my husband's sidechic'

A Nigerian woman has narrated how a woman she took as a mother ended up marrying her abusive partner she advised her to leave and suffered the same fate.

According to the lady identified as Omonigho Asekome, she became close with an elderly woman on her street who was a single mother of 4, she revealed they got so close that she started calling her “mommy”.

The elderly woman was a nurse and had a chemist down street, so she would usually tend Asekome wounds whenever her husband now ex, assaulted her.

They developed a close bond and Asekome would usually open up to the woman about her marital challenges, she advised her to leave her abusive husband, an advise she eventually took in 1998 and left with her 3 kids.

Asekome met the shock of her life when she visited the older woman with gifts to thank her for everything, the older woman confessed to dating her ex-husband while they were married and eventually married him after she left him.

She noted that the woman said she advised her to leave the abusive marriage because she wanted to marry her husband as she is matured and knows how to handle man like him, while she (Asekome) is inexperienced.

Asekemo noted that years later the older woman who bragged about being experienced in handling abusive men suffered the same fate and had to leave the man after several assaults and abuse.

Read her full story below; 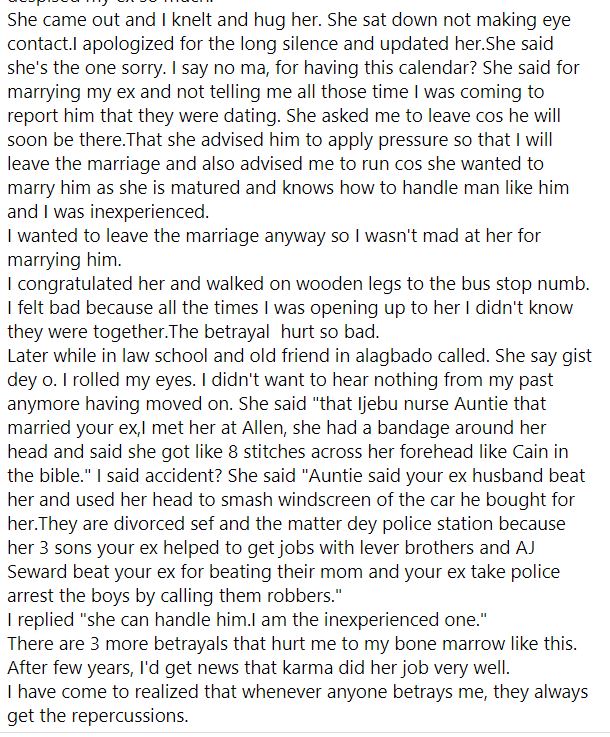