The leader of the Igbo delegation who met President Muhammadu Buhari on Friday, Mbazulike Amaechi has promised to "control" the leader of the proscribed Indigenous People of Biafra (IPOB) leader, Nnamdi Kanu should the former release him from detention. 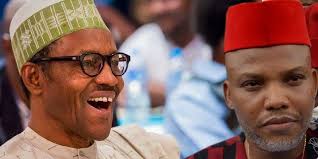 Amaechi made this known while calling for a political solution to Kanu’s trial and the insecurity issue in the South East, describing the situation in the region as “painful and pathetic.

The former minister asked the President to withdraw the military from the South East and he will ensure Kanu does not contravene the laws of the country.

“He would no longer say the things he had been saying,” stressing that he could control him, “not because I have anything to do with IPOB, but I am highly respected in Igboland today".

“I don’t want to leave this planet without peace returning to my country. I believe in one big, united Nigeria, a force in Africa. Mr President, I want you to be remembered as a person who saw Nigeria burning, and you quenched the fire.”