EXCLUSIVE: AfroCandy Opens Up On Her Séx Scenes and Much More 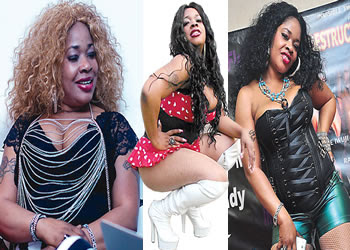 Exclusively, this is the interview with the controversial, never seizes to follow US-based Nigerian actress, Judith Opara Mazagwu, a.k.a AfroCandy. The mother of two is however insisting that many Nigerians love what she is doing and they are rushing for her movies, even though some are pretending in public.

Below are AfroCandy's revelations on her latest séx scene and more:

Your recently released movie entitled “Destructive Instinct” has generated mixed reactions. Surely you expected this to happen.
Well, you should know that the people that are condemning my movie are not my fans. They are pure haters. My fans do not condemn me, but they love everything I do. They are even happy that I could beat the odds to release the movie regardless of all the setbacks. I don’t care about the people that are speaking negatively about the movie. They should get used to it because this is just the beginning. It is what it is! Their bad comments and attacks did not stop me, can never stop me and will never stop me.

Is it true that you want to bring the movie to Nigeria ?
Yes. I was even preparing to release it in Nigeria this month, but there is a little discrepancy with the marketers. They want the original version with the sex scenes, but we are still discussing on some issues. I didn’t get naked and didn’t have sex in the movie and will regard it as the usual or normal movie. So, we are still on it and as soon as we reach an agreement, I will drop it.

How convinced are you that the Censors Board will not ban the movie in Nigeria?
I already told you the marketers said I should leave that for them to handle. That is why they are asking for that version. I guess they know better.

What is your grouse with Mercy Johnson, Uche Jumbo, Ini Edo and other Nigerian actresses?
I have nothing with or against any of the actresses .

It was reported that you always took Ini Edo along with you to locations back then. Does the relationship remain the same?
I never had any relationship with any of them. As for Ini Edo, I worked on the same productions with her director who had to beg me to pick her up from the bus stops. One was at the Amuwo Odofin. We were shooting a movie in Festac and she had no car then, while I already had my first car. The second time was at Ogba. That was years back.

Do you see these actresses ahead of you now?
I see myself as AfroCandy. I am who I am and doing my things in my own ways. I am not competing with any actress, neither am I trying to be like any other. So, I don’t see myself amidst anybody. Sometimes I make references just to let people know what is on, instead of just letting them judge me by mere assumption.

Don’t you feel you are missing as you are not based in Nigeria?
I live in a country where most of them long to live. I don’t think I am missing anything because I can still do whatever I want to do from America. The only thing is, I took a break to focus on raising my daughters as a single mother. I have to stay closer to them.My first has turned 18 and she is very responsible. I will loosen up a little bit to pay attention to my career though, so I will be doing more now. And whether I am in Nigeria or not, you won’t know the difference.

But Uche Ogbodo and Cossy Orjiakor remain your true friends in the industry?
I think I answered you before.

As a mother and an actress, which of your movies do your children like most?
I don’t discuss that with my children. I only give them a hint of my projects. They don’t even have to see my projects to like them, or approve of them, especially now that I have started doing more of explicit projects. Explicit stuffs are not for children.

But people, especially the under-aged, could gain access to these explicit stuff considering the level of technology we have today.
Well, you can’t control what children see on the internet, but your job as a parent is to educate them on the implications. If they are responsible kids, they stay away from such things. My kids are very intelligent, smart and very responsible. They know what to stay away from.

You recently celebrated your birthday. How fulfilled are you?
Very fulfilled.

How did you celebrate it?
I was too busy trying to release my movie. For now, it is all business before pleasure for me. When I achieve all I am working toward, I shall relax and celebrate birthdays because I don’t believe in chasing grasshoppers while the house is on fire.

How did you feel seeing your social media walls flooded with loads of birthday wishes?
It felt good.

You have more male fans than the females
I think so.

Maybe they got attracted to your weird postures?
The fact is that I am a female. More of the opposite sex should naturally be attracted to me.

Were you impressed with the turnout to your recent “Dick” auditioning?
I was overwhelmed, not just impressed. I even twitted about it. I got more responses than I expected.

What prompted the auditioning?
I cannot go into details about that for now.

In your last interview you promised to remarry soon. Any plan towards that yet?
No plans yet. Like I said, I am too busy for that.

Would you encourage any of your wards to go into acting or sing?
I have once answered that question but the press misconstrued it and wrote what I did not say. So, please, leave that. Leave my children out of it. They got their education to focus on and don’t need these distractions. If I want them to act or sing, they will. But for now, let them be.

What really spurred you to produce such movies?
I wanted to break a life time record. I wanted to set the pace while others can follow. You can say that I love making history.

Can you state briefly the main story line of the movie?
It is a long story, it’s a movie with four parts. I can’t start telling it here. I’ll rather have people get the movie and watch it to figure out what the story is all about.

Words were that it was because you’ve been starved of sex.
Oh, really? I never read about that. But I would let you and those that reported it to take a good look at me and tell me if I look like a sex starved woman. I guess it’s conji that is affecting our people. They are the ones that are sex-starved for them to have even had such crap in their hearts.

What are the challenges that almost turned you off during the course of producing that movie?
We had so many challenges right from the beginning to the end, but what matters is where we are. At last, the movie came out. It became a reality.

What should your fans expect after Destructive instinct?
I am coming out with a new movie titled ‘Ikebe Squad’ and a new single.

Would you say you are successful are as an actress?
I am not as successful as I want be, so I cannot tell you that I am successful; as long as the hustle continues, no success yet.

With your experience, how would you compare Naija entertainment and that of the US?
Is there any comparison between the two? The difference is clear because we are third in the world, meaning we are evolving in quantity, but USA is higher in quality, but we will get there someday.

How have you been able to contribute to the growth of the industry, especially in US?
You can see what I am doing already; at least I brought something new to the Industry.

One of the house mates of the just concluded Big Brother Africa (BBA), Beverly, had rejected your invitation to feature her in your film. How will you react to this?
I will not comment on that for now. I cannot answer anything that has to do with Beverly yet.

Would you honour the invitation if you were asked to participate in the next edition of BBA?
I want to reserve my comment on that. I remember the late Goldie featured as a guest artiste in one of the editions, but did AfroCandy represent Nigeria on BBA? I still want to keep mute on that. I don’t know, but it sounds funny to me.

How often do you follow the game?
I do not watch reality shows, but I know and heard about the activities on it.

As the African woman you claim to be, do you have African attires?
Of course, I have a lot them, Am I not an African Woman? Original Igbo Woman for that matter, I lived in Lagos for 14 years with all the Owambe parties.

Talking about appearance and looks, what reactions do you get from people when you go out?
Well, I do not walk around naked, and my stage appearance is usually different from the regular day to day dressing, so I do not raise any eyebrows when am on the streets. Sometimes you may not even recognise me; absolutely no different reactions.

As an African and Igbo woman, it is believed that people do not see single parents as responsible persons. What is your take to this?
That is Nigerian mentality, “slave mentality.” I want to tell you and those people with such mentalities to look around the world, especially in America, most influential people were raised by single mothers, President Obama was raised by a single mom, Oprah was raised by a single mom and the list goes on.

You mean you don’t have any regrets as a single mother, even if there were lots of condemnation to such development?
Does my looks and demeanor suggest that I have any regrets?

What is your most embarrassing moment?
I never really had a very embarrassing experience, but there was a time, I was moving into a new apartment, the truck and the movers were outside with some of my neighbours, I came out carrying something to the truck and somehow my wig got stuck on one of the things I was carrying and fell off of, everyone was looking at me before I realised I had no wigs on my head, I ran back into the house to fix it. It was a crazy experience.
Source: GistPlaza.com
CLICK HERE FOR MORE CELEBRITY GIST

Good luck to her and to all her fans.