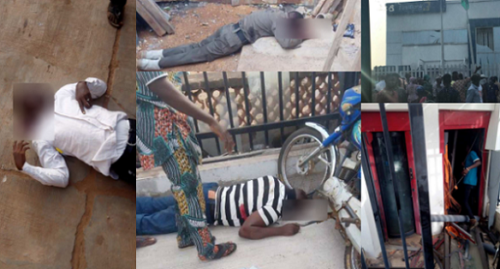 There was pandemonium earlier today in Offa, Kwara state after gunmen stormed the area for a bank robbery operation.

According to reports, at least four people were killed in the course of the operation including a security personnel. The robbery was reported to have lasted for several hours without any resistance from the police or the army.

The robbers who came with heavy weapons and dynamites which they used for the operation – carted away huge amount of money and cars before escaping through Igosun route in the area, according to reports..

My siblings just came back home. They were on their way back to church and caught in the cross fire, close to Zenith bank.

According to them, no military force confronted the robbers throughout the operation. They used dynamites and crazy guns.

They saw four people killed. And they would have been killed because after they finished the operation few of them opinned that they should release gun fire on them (my siblings and those close to them), but a man who seemed to be the boss told them they have little time left and had no option than to exit immediately.

Cars were burnt. Cars stolen. They exited through Igosun route. All the glory be unto God.