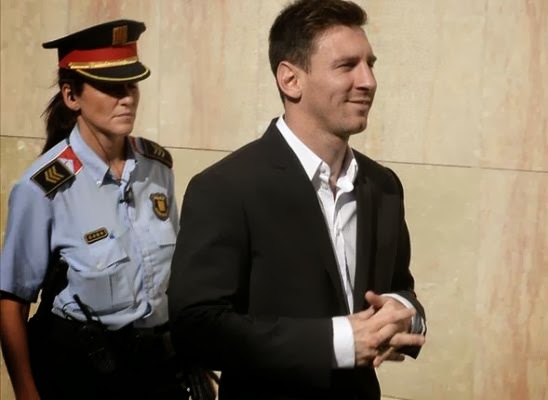 Four-time FIFA footballer of the year Lionel Messi and his father Jorge arrived in a Spanish court this morning Friday September 27th to answer charges of alleged tax fraud. Messi and his father are being accused of hiding over £3.4 million by filing incomplete tax returns from 2006 to 2009.

The charges against father and son was lodged by a state prosecutor in June 2013 claiming that they tried to conceal earnings from Messi's image rights - charges they both deny.


"I never take care of that (tax) stuff myself and neither does my father," Messi said in July. "We have our lawyers and our wealth managers to take care of that and we trust them and they will sort this out. The truth is I don’t have a clue about all this and that is why we have people taking care of it."

Messi has already paid the Spanish authorities the unpaid tax he's owing plus interest (he paid £4.2m) but because tax fraud is a serious offense in Spain, he still has to make an appearance in court where the courts will determine whether the case is pursued any further. Hopefully it will all end today!
click HERE for more entertaining News