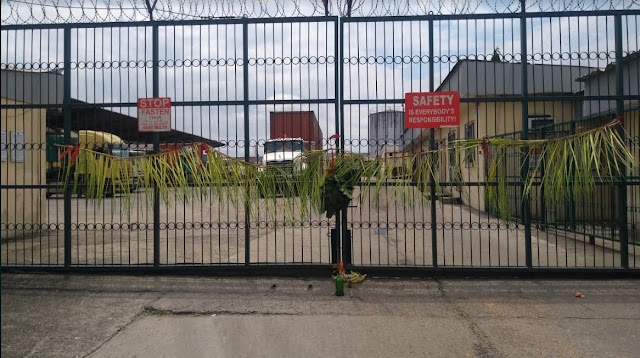 Residents of Calabar were stunned on Friday when they woke to the sight of charms placed on the gate of a multi-billion naira floor mill company along Murtala Mohammed highway in the Cross River capital.

The ‘juju’, made of yellow palm fronds and ‘Ekpe’ leaves, was hung at the entrance of the company by unknown persons said to be contesting ownership of the land.

An eyewitness, who declined giving his name, however alleged that the company has not giving attention to the plight of the people and that the host communities have not been given their entitlements including the employment of youths into better positions.

“In most cases, when this thing happens, it means the company was not giving adequate attention to the needs of the landlord communities and the people.

“In the case of this company, the youths are complaining of unemployment while the landlord communities are also saying that they have not been taken along,” the source said.

It was observed that all staffers of the company were outside discussing the development in groups.