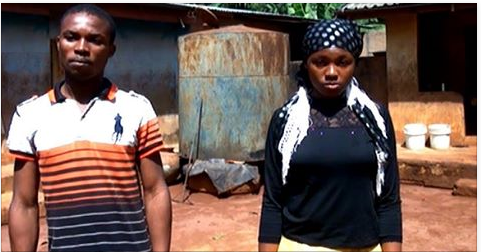 He claimed that God told him to do so.

Ezeibekwe told newsmen that he had a revelation where God told him to marry his sibling.

He further quoted Bible passages in Deuteronomy to illustrate that siblings could marry each other.

He said, “One advantage of doing this is that it discourages divorce. It also retains family values and norms.”

The teacher said he did not pay any bride price to anybody in respect of the marriage.

The wedding was conducted by Chiadikobi’s elder brother, Chijioke Ezeibekwe, who is the priest of Dwelling Fullness of God Church, Agba, Ekwulobia.

However, the youth of the village had set ablaze the church, Dwelling Fullness of God Church, where the wedding was conducted.

Reacting to the issue, the traditional prime minister of Ekwulobia, Gabriel Ezeukwu, said, “Agba village youths, who saw the marriage as an abomination, set ablaze the church where the wedding took place.

“I restrained them from further action against the man and his family. If it were in the past, the entire family would be burnt down because this is a grave abomination and sin.”

The eldest son of the family, Emeka Ezeibekwe vowed to resist their union.

He said, “It ’s over my dead body that they will call themselves husband and wife. It can’t happen.”