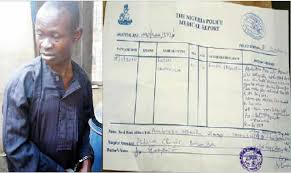 A self-acclaimed apostle has been arrested by the police for the alleged abduction and rape of a 21-year-old woman, Esther, in Ibusa, Asaba, the Delta State capital.

The suspect, identified simply as Paul, had allegedly held the victim captive in his shop for about one week, before he was caught on Thursday.

PUNCH Metro learnt that Paul, who founded the defunct Paul Zion Deliverance Ministry, Asaba, sold scriptural items in the shop, which was opposite a parish of the Living Faith Church Worldwide (Winners Chapel) on Ibusa Road.

Esther had attended a vigil at the Living Faith Church with her family members on Friday, January 12, when Paul allegedly hypnotised and abducted her.

It was gathered that the family members searched for her around the church after the vigil to no avail.

They subsequently reported a case of missing person at the A Division of the Delta State Police Command, while the church prayed for her safe return.

A friend of the victim’s brother had reportedly gone to buy something at Paul’s shop on Thursday when he sighted her and informed the family.

Esther’s elder brother told newsmen that some church workers apprehended the suspect and held him until the police arrived.

The brother, who did not want his name in print, said, “We went for a vigil at our church on Friday, January 12. We could not find her after the service. My sister is a special child. She had convulsion while she was young and it affected her. She can’t read and write.READ MORE