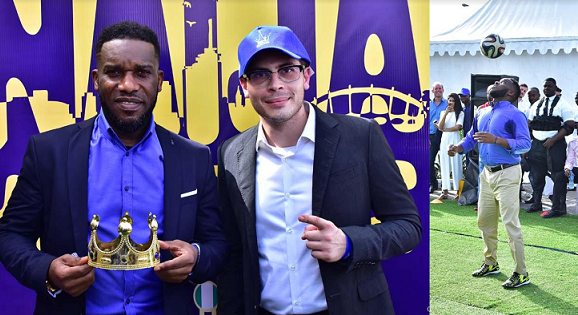 Nigerian football legend, Austin Jay-Jay Okocha, was officially crowned “king of the game” at the launch of BetKing, a premium sports betting platform, in Lagos, today.

Regarded the greatest player of his generation and one of Africa’s best ever, the former Super Eagles captain and European league veteran was the star of the show as the much-anticipated BetKing platform made its entry into the Nigerian sports betting market.

“I’ve trained my whole life to be a winner and if I know two things it’s that to be the best takes passion and persistence.

Similarly, BetKing’s philosophy really speaks to me in that it believes that everyone, whatever their position, has a chance to become King of their own destiny,” said Jay-Jay who himself has come a long way since he began playing football on the streets of Enugu with a makeshift ball.READ MORE

ow, I remember how I made a bet on the football game when he played football... Then, of course, I won, and my winning was $1000, however, I couldn't withdraw money due to the fact that online betting site I made the bet had problems with money withdrawal and due to an error, my money simply disappeared... Since that time I decided to try trusted betting site in Singapore, because first of all it attracted my attention because of the regular promotions. By the way, betting on that site I've never had any delays in withdrawal of money