Buhari do not have physical, intellectual capacity to govern – Na’Abba 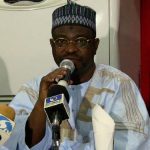 A former Speaker of the House of Representatives, Alhaji Umar Gali Na’Abba, has said President Muhammadu Buhari lacks the physical and intellectual capacity to govern Nigeria.

Na’Abba said this when one of our correspondents contacted him to confirm comments attributed to him concerning calls on the President to seek a second term.

He told one of our correspondents over the telephone in Abuja, on Sunday, “He (President Buhari) hasn’t got the capacity physically and intellectually to govern Nigeria this is my honest opinion.”

In response to a question as to whether he said the ‘President feels that since he is now in charge, everything is in order,’ Na’Abba said, “I confirm what I said in the interview with Osasu on the Ossasu TV show.”

He said the President would not get his support should he seek a second term come 2019.

Na’Abba, who is a member of the Board of Trustees of the All Progressives Congress, said this on the Osasu Show anchored by Osasu Igbinedion.

Asked whether he would be supporting Buhari, he said, “There is no way I can support him.”

He said when he met with Buhari to advise him, the President said he should not worry, that everything was going as planned.READ MORE